A New Twist on What It Means To Be Human; Understanding Metahumanism and Mardukite Systemology

In 2019, the “Grades” for the Mardukite Academy were plotted out by Joshua Free, providing not only a new critical understanding of his works, but also to illustrate the true and ultimate progression of work necessary to reach the highest goals for the Human Spirit and its future metahuman existence.

For the first time, the Way Out is clear.

Yet the majority of the individuals newly discovering the work are finding our methods and delivery quickly becoming even more esoteric than ever before… and more than anything they have encountered before… and we must ask ourselves why?

The resounding answer indicates that many are still treating the work from within their own fixed paradigms and low-level Awareness and understanding that is represented further down the “Ladder” “Stairway” or “Path.” Without flattening these collapsed waves back into potentiality in early Grades, a Seeker risks only coming up on obscurity when operating outside of (and apart from) the precision delivered directly from the Mardukite Academy of Systemology and even the Founding Church of Mardukite Zuism.

The “Gradients” established for the work directly mirror the progression of the proverbial “Gates” — those which markedly represent assumption of the Human Condition and likewise demonstrate the map for Way Out! The same Pathway which has led downward and increasingly fixing our attentions and Awareness exclusively here on the Physical Universe and operating a Point-of-View (POV) interior to a “Human Body,” merely needs to be reversed and defragmented.

We have discovered that all those who attempted this journey in the past were fixed to some paradigm that only gave a possibility for the illusion of traversing seven gateways and actualizing a Metahuman existence, when in actuality, the initiate had only done so upon the same “plane” or “gradient level” on which they began. They only had the sense of the movement involved in “having arrived” and thereby abandoned any higher pursuits to Ascend.

Given that there are potentially seven cycles within seven gradients… that leaves a Seeker with 49 potential detours to remain fixed at on their way to Infinity… Where our Mardukite Systemology work now allows understanding of how all of these levels (implants) would have to be faced (confronted) and defragmented — any one in particular can act as a point of finality for a Seeker; and they would simply remain fixed to that particular avenue indefinitely.

The Complete Mardukite Master Course:
The Key to Gates of Higher Understanding
based on the lecture series by Joshua Free

Before significantly individuating away from public view in 2020 to dedicate all time and resources to upper-level work, Joshua Free demonstrated a concise treatment of the “Master Grades” (Grade-I, II and III) to the Mardukite Academy at Borsippa-HQ.

This became known as THE COMPLETE MARDUKITE MASTER COURSE.

While Audio-CDs were once distributed (and are still played for students at the Academy), the official textbook THE COMPLETE MARDUKITE MASTER COURSE is a Seeker’s best alternative to direct in-person instruction for achieving the critical realizations necessary for rising above Grade-I, II and III (the first three Gates) — the Master Grades — and breaking into higher grounds at upper-levels to establish Beingness.

There is no substitute for a complete “Master Grade” review before a Seeker attempts their way further on up the Pathway toward the Gateways of Infinity. The books themselves do not guarantee your reach without a perfect duplication of its level of understanding. This can only be successfully established by working from progressively higher gradients or “ledges” or Knowing… or Know-Ledges…

We present a Seeker with great risk of invalidation — for themselves and for our organization — by delivering the work as we do, making it available in print to those who may not have reached a proper point to make best use of it. As a result, a Seeker working independently should dedicate themselves to a serious study of our plentiful titles to make certain that they are maximizing their experience progressively each step of the way. This Pathway is not a fad or something to do when there is nothing good on T.V. This is serious work requiring significant personal dedication… and it is very real.

There are no short-cuts or fast-passes; an individual cannot ‘buy’ their way or even ‘think’ their way beyond the barriers that have already been imposed by Self. Sure, these may be encouraged by implants, prompting and coercion; but in the end, we have agreed to duplicate these facets as our Reality during our descent — and now the only way out is through.

These barriers and Gates are creations that Self has hidden away but is still actively creating, personal spiritual energies entangled to their creation that keep an individual feeling heavy. This accumulated spiritual mass has kept the Human Condition bound to the gravity of this existence for far too long.

Given the increased popularity and overwhelming interest flowing toward recently published IMAGINOMICON (Grade-IV Metahuman Systemology, Wizard Level-0), it is obvious that there are now more Seekers than ever that will require proper reviews of Master Grade work.

“When examining thousands of years of esoteric lore it becomes evident that after love, money and material power, the apocalypse or opening gates to unleash some primordial force into the world is the next most common effort made by magick-users throughout the ages. For every magician of order and harmony there is a warlock of chaos and discord. For every divine name or Tetragrammaton there is that coveted unspeakable word (or vibration) believed to undue all systems of the material world: the Uncreation, as some call it. Even hidden in the infrequently touched crevices of Enochian magick and Kabbalistic lore such teachings exist.” –Joshua Free, in his introduction essays to the “Necronomicon Anunnaki Bible” (now available as a 10th Anniversary Seventh Edition). 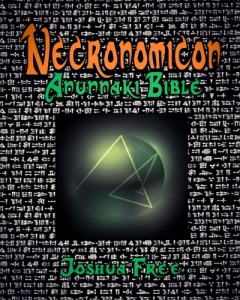 “…between these ‘Gates’ and the ‘Seals of the Apocalypse,’ or that is to say the ‘Armageddon Clock’ of humanity that has been set forth…the Earth Planet and local system moves through it’s own initiatory ‘Ladder of Lights’ and the finality of this coincides with the opening of the ‘Quadrangles,’ meaning the ‘Gates’ of the ‘Four Corners’ of the Universe – to the outside! These Gates do not open all at once but instead ‘swing wide’ gradually over time…”

NO ROOM FOR THE WICKED – IN THE ANUNNAKI “NEW AGE”
an-un-na-ki ti-i-ru u na-an-za-zu
May the Anunnaki Return and Be Established!

In spite of dark connotations falsely enshrouding these mysteries in the “outer world” — Most practitioners drawn to this path are not sympathetic to the destruction and malignant energies manifested by the “human” population on the planet. [A species correctly dubbed by T.H. White as “homo ferox” in his “Book of Merlyn”].

(It is this very malignant, vicious and violent nature of “humans” that forced the Anunnaki to leave earth in the first place – as did many now otherworldly races that have fled the sheer numbers and crude weapons of humans. Beings that once physically cohabited with humans on earth!)

It seems to some that the only solution to protect the integrity of “the Big Picture,” even beyond the next “seven generations,” requires reincorporation of original source powers that originally brought this all into being at its inception. Whether or not this energy can actually coincide with the current human systems in place – becomes the last of our concerns.

THE MAGIC “BEHIND” THE MAGICK 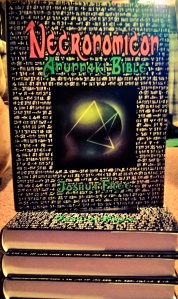 It would seem that the contemporary New Age community, that is self-proclaimed as “enlightened” too often misses the liberation of the era shift, for they quickly replace one system for another. The ‘divinity’ that once communicated regularly with priests and sages of the ancient world left us with clues. These clues are reinterpreted today as either blatant fantasy or as yet another mirror of Christianized divinity with “mythological” names and attributes. The more effective ritualists and wizards of the current era have not succumbed to the same when discussing matters of “gods” and “spirits.”

Consider even these words of Aleister Crowley:
“My observation of the Universe convinces me that there are beings of intelligence and power of a far higher quality than anything we can conceive of as human… and that the one and only chance for mankind to advance as a whole… is for individuals to make contact with these beings. …Our work is therefore historically authentic; the rediscovery of the Sumerian tradition…”

And so it seems quite different then the average New Ager’s perspective of the “spirit world,” discarnate ancestors and other entities bound to a book of spells, that leading members of this movement throughout the ages have understood that it is the contact with these specific beings, Gatekeepers to our Universe (and perhaps even our Creators as the most ancient lore would have us understand), which makes up the true and coveted magick of the ages, the very keys to our universe and material existence…

The Anunnaki sealed within this system are seven. Among them is MARDUK, who sealed the others to Gates of Babylon. Before them all is the Earth Gate [Foundation of Heaven and Earth]. Beyond them all is the Ring [Gate] of Pass Not – wherein resides the Ancestral Chiefs of the Supernal Trinity – The Elder Gods: ANU, ENLIL & ENKI. 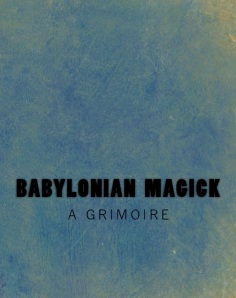 Anunnaki energetic forces (currents) are bound to the Seven Rays and the Seven Stars – each vibrating a tone or color of manifestation into existence. The powers of the Anunnaki – as connected to the planets and rays – have called the “zonei” or “zones” – comparable even to the Stations of the Spheres. 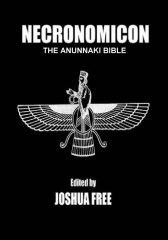 May the wise ones come forth to tap the powers of the Gateway of the Gods, that these currents may be realized on Earth once again, and may the Anunnaki return and command obedience. [But beware – the deception of fragmentation for the colors and flavors displayed before you are of a unifying Source.]

Beyond the Seven Zonei [Anunnaki] are the ‘three rays of unity’ that become fractured into ‘seven parts’ in our sensory range of existence. Beyond the Supernal Trinity is the One, the Eternal Source of All Being and Creation that is manifest in the will and form of every thought and thing.

Powers of the younger Elder Gods are sealed to the blood of their ancestors – as is yours, dear Gatekeeper – all from ANU, divided then between ENLIL and ENKI. The ancient texts explain that the Blood of Kingu and the Breath of the Elder Gods were combined for your existence and it is from these things alone that “magickal powers” can be manifest by beings that possesses them. 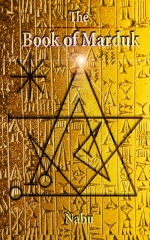 By succession, NABU can lead you to MARDUK, who can petition you to ENKI; ENKI to ENLIL; and ENLIL to the powers of ANU, if desired. In the true pious tradition, energetic powers are “sent down.” You can distinguish the genetic source of a ‘current’ by its birthright – often connected to the sigil-glyph-insignias of command, mainly triangles, indicating the King of Heaven (ANU), the Lord of the Command (ENLIL) and the Lord of the Earth (ENKI).

Consider the sigil-seals of the two primary factions of Anunnaki that inhabit the ancient world. In the Babylonian tradition, currents of both “sides” are invoked toward the completion of the Earth System. Rivalry (between “polarity”) does not slow the course of natural systems because, as it is said, “the show must go on” and on a larger scale, the duality is not actually perceived to exist (such as in the older Sumerian tradition).As a symbol, the “hexagram” sigil is found where power is evoked from ceremonial grimoires, angelic mysteries, etc. Furthermore, the “merkaba” appears when communication and exchange of energy with forces beyond our sensory range of the material world occurs. 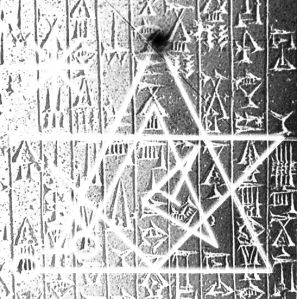