“In ancient Babylon, the New Year Festival was the central most religio-political ‘Mardukite’ event marking the beginning of the annual cycle.”—observed throughout the world as the start of the Spring season—this March 21, 2019 is distinguished as the 10th Anniversary of the first modern Mardukite revival observation of the Babylonian New Year Festival, the start of a powerful turn of the ‘Wheel of the Year’ leading up to the infamous “Beltane Gate” May’s Eve Festival of the modern “Mardukite Necronomicon Tradition”—also planned as a global ritual meditation working this year! 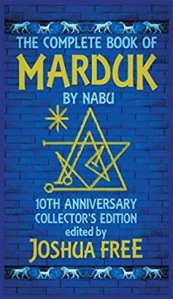 At the time in “celestial history” when the original Mardukite tradition in Babylon was systematized, the spring equinox observation of Akitu (or Akiti) coincided with the sun entering the “Aries” zone—the zodiacal sign of Marduk. This spring festival symbolized not only agricultural fertility and renewal of the land on earth, but also a restatement or reinforcement of the national position of Marduk and his role in the universe.

To coincide with this incredible 10th Anniversary milestone in the evolution of the modern “Mardukite” paradigm of Mesopotamian Anunnaki Revival—the Joshua Free publishing imprint representing the Mardukite Truth Seeker Press has authorized a special March 21 release of the 10th Anniversary hardcover: THE COMPLETE BOOK OF MARDUK BY NABU: A POCKET ANUNNAKI DEVOTIONAL COMPANION TO BABYLONIAN PRAYERS & RITUALS—A collector’s edition of the long-lost translated cuneiform tablet collection, revealing secret underground methods to acquire direct communication with what some call “alien intelligences” via a program of ancient-styled Babylonian-inspired devotion, reviving the same techniques as ancient Mardukite priests of the Sumerian Anunnaki in Mesopotamia.

[This book may be used to assist annual personal observation of the Spring Akiti/Akitu or Zagmuk Babylonian Festival and the Mardukite Beltane Gate ritual meditation work, with additional advice for daily rites throughout the year.]

The Akkadian name for the final day of the festival—Akiti or Akitu—translates roughly to “On Earth, Life.” Most scholars usually only recognize the “agricultural” significance and not necessarily the “political” and “mystical” functions of the observation. True, the Akitu festival took place twelve days before the annual crops were planted—but, this large public national “celebration” also reconfirmed supremacy of Marduk and his position in the Babylonian Anunnaki Pantheon, making it the single most important ancient “holiday” for the Mardukite tradition.

This amazing new 10th Anniversary collector’s edition of THE COMPLETE BOOK OF MARDUK BY NABU reflects a very real modern philosophical and meta-spiritual “New Thought” movement aligned specifically with the Anunnaki paradigm. In ancient Babylon, this was famously celebrated among the followers of Marduk—recognized among the pantheon as patron of Babylon city and self-made Anunnaki “King of the Gods” for the “Mardukite” or “Babylonian” branch of the Mesopotamian mythos, with the assistance of the Nabu priesthood of scribes. In commemoration of the anniversary release of a “complete” BOOK OF MARDUK BY NABU, additional portions once released separately as The Book of Zagmuk by Nabu are also included, detailing the annual Spring Equinox Festival or Babylonian “Akiti”/”Akitu” New Year Rituals

After a time of gods had come and gone, the priests and kings continued to observe these ceremonial customs using representative “images” or statuary to symbolized the “divine presence” of Marduk and Nabu as they made a procession each year through the streets of Babylon. Each of the twelve festival days begins at dawn. The High Priest of the “Temple of Marduk”—the E.SAGILA or “House of Marduk”—goes and prepares the temple and other ceremonial areas before dawn, then makes a “general invocation” to Marduk, before the “image” (statue) of the god in his shrine…

Ten years ago, materials from THE COMPLTE BOOK OF MARDUK BY NABU circulated underground, serving as an early cornerstone of “Mesopotamian Neopaganism,” paving the way for a decade of developmental research and experimentation by the “Mardukite Research Organization” of “Mardukite Chamberlains.” Selections included in this revised and expanded, beautifully crafted, portable hardcover Mardukite Liber-W+Z volume have also inspired many other incredible literary classics, including THE COMPLETE ANUNNAKI BIBLE and THE SUMERIAN LEGACY by Joshua Free.