In a world of scandals, travesties and abuses of every nature known to humanity, it seems like there are few true Shining Paths left for those who seek something real in an otherwise virtual world… First conceived of by Joshua Free in the 1990’s to satisfy a personal quest, the modern MARDUKITE brand of ‘kNowing’ emerged officially on the 2008 Summer Solstice, quickly exceeding any expectations of public reception–and this was a time before widely broadcasted shows like “Ancient Aliens” made the ‘Anunnaki’ a household term or even the inception of Icelandic Zuism.

Spanning more than ten years, the combined academic and esoteric efforts demonstrated by the modern ‘Mardukite Research Organization’ have gone forth to inspire thousands of people all over the planet in both practical scholarly ways and in the promotion of the greater spiritual evolution of those on the path. Although not intended originally as a “religious institution,” the systemology unearthed from Babylon reveals the origins of all worldly religions, and is in itself, often considered the “oldest religion” on the planet. But the wide-angle scope of the ‘Mardukite’ work is fixed beyond mere worldly religious ideals… it is grounded in the very TRUTH that humanity has lost sense of, and of which only remains hidden and protected by those who carry the torch in self-honesty.

Commemorating the 10th Anniversary of the modern MARDUKITE inception, the ‘Mardukite Truth Seeker Press’, in conjunction with the ‘Joshua Free Publishing Imprint’, has arranged for the reissue of newly revised, rewritten and updated editions of the ‘Mardukite Core’–a specialized library of literary materials. These include the original
‘Year-1’ source book titled: NECRONOMICON: THE ANUNNAKI BIBLE (Mardukite Liber-N,L,G,9,M,W+S) already available as a 10th Anniversary hardcover collector’s edition, with a subsequent paperback version titled: THE COMPLETE ANUNNAKI BIBLE: A SOURCE BOOK OF ESOTERIC ARCHAEOLOGY (edited by Joshua Free) scheduled for global release on March 21, 2019–the Akiti/Akitu Babylonian New Year Festival! 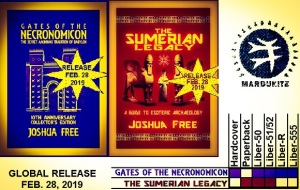 Following on the heels of the esoteric tablet collection contained within the primary source book, the ‘Mardukite Chamberlains’ released a cycle of Year-2 research materials expertly supplementing both mystical and archaeological aspects of the work simultaneously. Joshua Free’s GATES OF THE NECRONOMICON: THE SECRET ANUNNAKI TRADITION OF BABYLON (Mardukite Liber-50,51/52,R+555) premieres on February 28, 2019 as its 10th anniversary hardcover collector’s edition, with a subsequent paperback featuring the Mardukite Liber-50+51/52 portions specific to ancient studies in Mesopotamia concerning Sumerians, Babylonians and the Anunnaki, also scheduled for release on February 28, 2019 as THE SUMERIAN LEGACY: A GUIDE TO ESOTERIC ARCHAEOLOGY by Joshua Free.