Commemorating the 10th Anniversary of the modern “Mardukite” inception, Director of the “Mardukite Research Organization”—Joshua Free—is taking great strides to reintroduce a new generation of “NexGen” Truth Seekers to the revolutionary New Thought developments released by the “Mardukite Truth Seeker Press” to encourage a modern revival of ancient Mesopotamian religion—using the specific underground tradition of the “Mardukite” Babylonians as a base… such has never been done before on the planet for thousands of years! 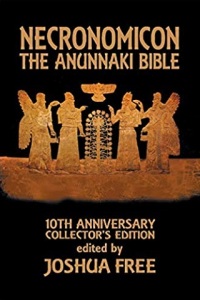 Central to efforts for reviving the ancient Mesopotamian traditions and Mardukite Babylonian (including Chaldean and Assyrian) systems of esoteric magic, astronomy and philosophy—the inception of this modern “Mardukite” mystical, spiritual and archaeological revival first emphasizes exploration of the Mesopotamian Mysteries as collected within the once underground source book, developed by the “Mardukite Chamberlains” during their first active year and now revised, re-edited and revisited for a 10th Anniversary Collector’s Edition Hardcover as: NECRONOMICON: THE ANUNNAKI BIBLE edited by Joshua Free.

Joshua Free explains on a recent episode of ‘Mardukite TV’, rebooted on YouTube for the Mardukite 10th Anniversary—

“Although the greater body of our [Mardukite] work is more encompassing and universal than strictly ‘Ancient Near East’ studies, one of the core fundamental topics of esoteric history and tradition that we do focus on is the ‘Source’—the oldest systematized aspects of modern human development—the origins of writing itself; the ability to record history; also the inception of many worldly systems, beliefs, programming and civic aspects, all of which bring us back to the heart of Mesopotamia and the cuneiform tablet records of the Nabu priest-scribes of Babylon. These ‘magicians’ literally used a newly refined language and the ability to record written communication to actually shape human consciousness and beliefs… These systems have continued to remain in the control of higher orders of citizens, business and other authority…”

NECRONOMICON: THE ANUNNAKI BIBLE is a collected works anthology comprised of seven discourses originally released separately to the underground in 2009 (and 2010). It is an unparalleled unequaled modern collection of the most ancient writings on the planet—brought together with the explicit purpose of being used, as relevant today as the day the cuneiform clay tablets were first formed. The book has been prepared for the “every man,” without the need for previous experience or esoteric education—although someone with some will undoubtedly find that it advances their prior gleanings greatly. Those supporters who have taken a step back to see the wide-angle “big picture” source knowledge that this provides and how relevant it is to global history, traditions and civic evolution have found that this paradigm or methodology is superior to all alternatives available to us today.

Many people are familiar with—or are traditionally taught—a limited view of human history, mostly restricted to a classical period of Greeks and Romans, and maybe even a little nod in the direction of the Egyptians. There is little or no attention given to the “less-accessible” and “less understood” sources of these later developments in human civilization—sources that extend back to Mesopotamia, the Anunnaki and the Mardukite Babylonians. Personal feelings and misrepresented politics regarding areas now known as the “Middle East” really do not help matters. Not to mention that current populations in these areas do not observe these ancient traditions either. So, there really was no representation for this path in the “New Age” or any decent source material for an authentic resurgent revival before the Year-1 2009 work of the modern “Mardukite Chamberlains” that is culminated as NECRONOMICON: THE ANUNNAKI BIBLE edited by Joshua Free.

Accept no imitations or substitutions… This is the book you want to get you on your way!