While many folk are familiar with and taught traditional knowledge and lore of the “classic era” of the Romans and Greeks, with occasional ventures into pop-culture mythologies of Egyptians, it seems that little or no attention is given to the source of all this: the Mesopotamian region and the Middle East…

[This mardukite.com blog post is officially excerpted from the essay “Toward a New Babylonian Vision” by Joshua Free, first appearing in 2009 Ruby Edition of Liber L and reappearing as one of the introductory prefaces for the Mardukite Research Organization core sourcebook anthology: Necronomicon – The Anunnaki Bible, now in its sixth edition!]

…But, What is even more counter-productive for the Western world, politics with current world leaders and sects from those regions clouds the ability of the ego to accept anything from them. And what’s more, being that the traditions are pre-Christian in origin and agricultural or “earth-oriented,” they are subject to the same negative stereotypes that contemporary folk associate with any and all things considered “heathen” or “pagan” and really without just-cause.

It is important to understand that the study of this lore and observation of diverse traditions are not restricted to a particular region or culture, they simply seem to originate from a specific source, as did human civilization as a whole. With the spread of the human race followed the spread of the tradition which seemed to take on new forms and colors as it passed from generation to generation across the expanse of the planet.

Life-giving powers and their symbolic representations also appear to have been influenced by time and geography. While the sanctity of the “Sacred Fire” and the flame become apparent in the traditions and systems of the west and north, the people who originated the traditions more closely to the planetary equator more closely identify with the Waters of Life, most closely identified with ENKI (or PTAH in the Egyptian Tradition). 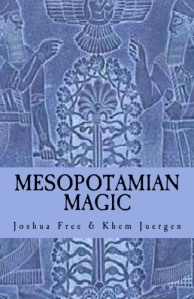 The name “Mesopotamia” literally means: between or midway of two rivers, referring to the Euphrates and the Tigris, but the sacredness of water does not end here, as we can see that all the originating cultures that we can still identify or connect the source tradition to (non-nomadic) emerged or cultivated around key waterways: the Indus River Valley, the Nile, the Danube (Rhune/Rhine) and
even the Amazon.

The Sumerians called the Euphrates, BUR.AN.UN and it was also known as “Perath” or PU.RA.TU. The 1,800 mile long river begins to rise in late March, just about the time of the Spring Equinox, recognized as the start of the annual Zodiacal Wheel and also the famous A.KI.TI New Year Festival. The Tigris, known as I.DI.IK.LAT and ID.IG.NA (and called the “Serpent River” by some Arab sects) is somewhat shorter at only 1,150 miles and begins to rise at the opposite half of the year, usually coinciding with the Autumn Equinox.

According to historical geologists, the flow of the Euphrates has actually moved westward with age and there is actually more land in Babylonia at present than during ancient times given the shrinking of the Persian Gulf (by 72 feet per year). The fertile alluvial soil in southern Babylonia created a distinct environment by contrast to the northern regions of Mesopotamia. Even the Babylonian region was divided between southern SUMER and northern AKKAD (Agade).

Each of the city-states was originally ruled by its own “Patesi” until eventually the battle for supremacy resulted in a unification of the two lands (as similarly occurred later in Egypt) under a single “King of Sumer and Akkad”, eventually known as the LUGAL or “Great Man”. The esteem of this position also included a mention in the “Book of Kings” [Tablet K] and local government was watched over by priest-kings who adhered to a “Book of the Law” [Tablet L] of which the Code of Hammurabi was largely based on…

One response to “Modern Assyriology: Exploring the Ancient Near East – Understanding the Babylonian Paradigm”